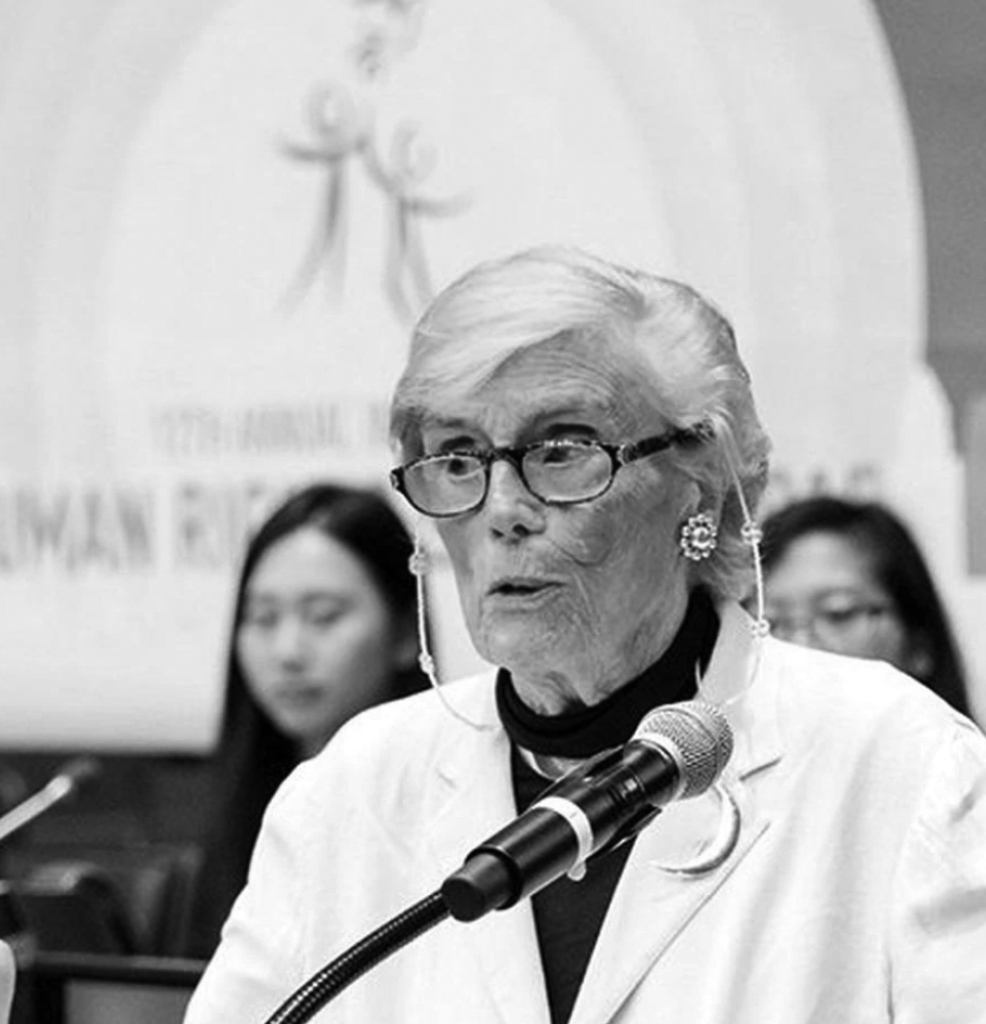 Ella King Russell Torrey ’47, who dedicated her life to peace, diplomacy, and human rights after losing her 20-year-old brother during World War II, died Tuesday, April 14. She was 94.

Her death at Chestnut Hill Hospital was due to complications from COVID-19. She had lived at Cathedral Village in Roxborough for 15 years.

In March 1944, Mrs. Torrey was preparing to enter Bennington College when word came that her brother, pilot Louis Russell, had been shot down and was missing in action over the Pacific. His remains were never found.

“This was when Ella decided that war was not the answer,” her family said in a statement. Over a half-century, Mrs. Torrey advocated for cross-cultural understanding and human rights.

Her most high-profile job came in the early 1950s as public information officer for Eleanor Roosevelt, who had been appointed by President Harry S. Truman as a U.S. delegate to the United Nations. She was also Roosevelt’s stand-in on the U.N. Human Rights Commission. Mrs. Torrey told the Chestnut Hill Local in 2011 that she handled Roosevelt’s speeches and correspondence. She found her boss to be good-humored and a hard worker.

“I wasn’t afraid of her at all,” Mrs. Torrey told the Local. “Working days began with staff meetings and then scheduled U.N. meetings around 10 a.m. Lunch was either an official meeting in the delegates’ dining room or, as Mrs. Roosevelt preferred, in the cafeteria, where she carried her own tray and we sat with secretaries, guards, and U.N. staffers.

“It became very personal, and I was often invited to eat dinner with her and visit occasionally at Val-Kill Cottage,” her home in Hyde Park, N.Y.

Born in Philadelphia to Norman F.S. and Ella D. Russell, she was raised in Edgewater Park, on the Delaware River in Burlington County. An aspiring dancer, she graduated from the Agnes Irwin School in Bryn Mawr. She had commuted from New Jersey.

On a lark after graduating, she and a friend auditioned for the high-kicking Rockettes in New York City. She failed the test. Once her father heard of the audition, he urged her to enroll in college. She graduated from Bennington in 1947 with a bachelor’s degree in English.

After college, Mrs. Torrey joined the Chicago Tribune’s bureau in Paris, soon becoming an editor in the Paris bureau of Al-Misri, then Egypt’s largest daily newspaper.

“She was one step closer to her interest in the United Nations, which, in Paris at the time, was dealing with the Arab-Israeli issue,” her family said. In late 1949, she joined the U.N. as an information officer, writing reports on all meetings of the Security Council, General Assembly, and U.N. committees. The reports helped government agencies and U.S. embassies overseas formulate U.S. foreign policy. As a reward for her performance, she was made an aide to Roosevelt. In 1954, she married Carl “Buzz” Torrey. That year, the family moved to Cambridge, Mass. Later, the Torreys lived in Bethlehem, Pa., where she became director of the local World Affairs Council.

Their final move, in 1969, was to Chestnut Hill. She became community affairs director of the World Affairs Council. An engaging guide, she led cultural-exchange tours to the Soviet Union, China, and Nepal. From 1977 to 1987, Mrs. Torrey was executive director of the International Visitors Council. Under her tenure, the Philadelphia branch grew to serve more than 4,000 foreign visitors a year.

Mrs. Torrey retired at age 62. She volunteered for the Friends of the Wissahickon and the Philadelphia Committee on Foreign Relations. In 2015, Mrs. Torrey received the U.N. Human Rights Hero Award from the U.S. Mission to the U.N., for her 50 years of service. She addressed the delegates during ceremonies in New York.

She is survived by a son, L. Russell; a daughter, Elizabeth P.; and six grandsons. In addition to her brother and husband, she was preceded in death by daughter Ella King Torrey and son Carl G. Jr.

We are grateful to The Philadelphia Inquirer for providing permission to republish Ella’s obituary in our magazine. This remembrance was written by Inquirer writer and journalist, Bonnie Cook, and published on April 20, 2020.