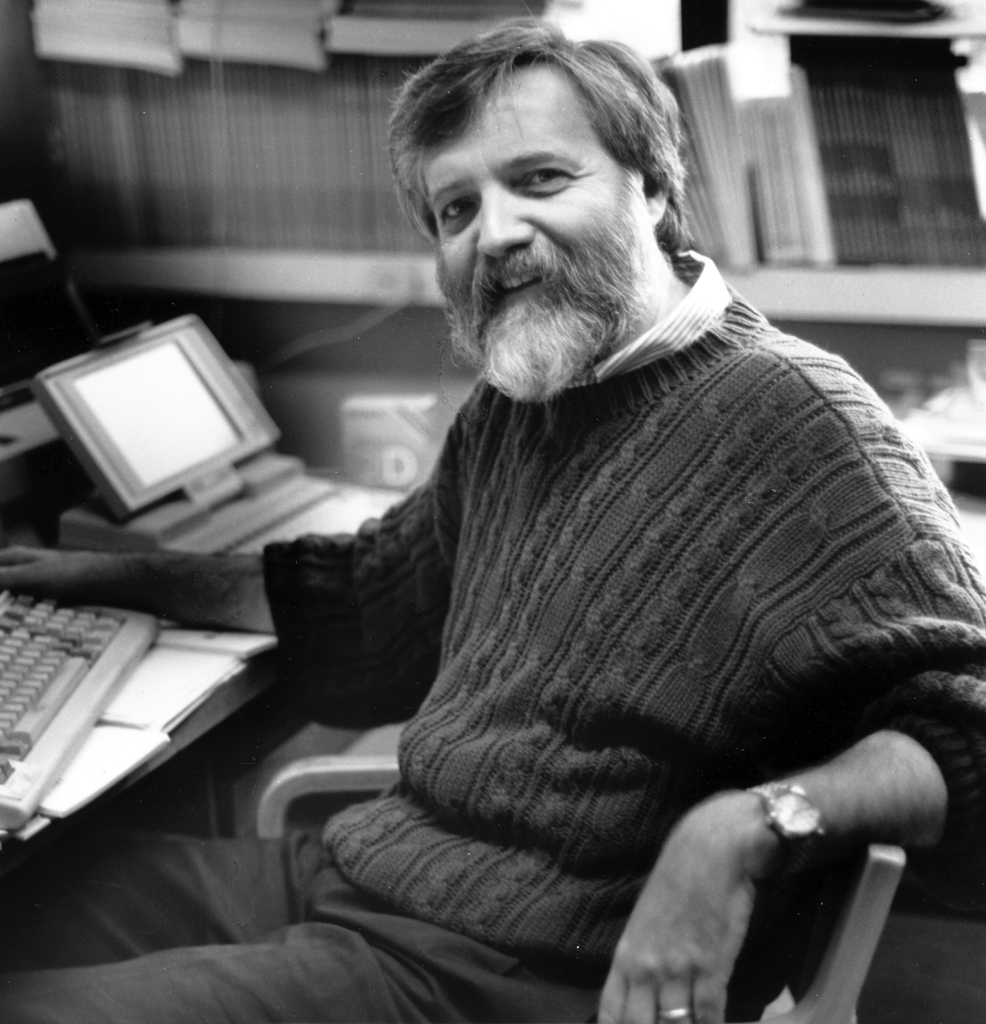 Ron Cohen—beloved teacher, justice scholar, and stalwart proponent of progressive education—died on March 31, 2020. He was 75.

As a young doctoral candidate at the University of Michigan, Ron attended a non-violent sit-
in one September in 1968. He was arrested, handcuffed, and thrown in the back of the police van, which is where he met Judy, a fellow protester. They married two months later. “I recommend this to everyone,” he chuckled during a campus storytelling event. “Do a lot of nonviolent resistance and meet the person that you love.”

A few years later, in 1971, the young couple moved to Bennington College so Ron could teach social psychology. Judy had just given birth to their first child a week earlier and Ron was fresh out of graduate school. Everything was beginning.

By the time he retired as professor emeritus in 2016, Ron had been at Bennington for almost half a century. “My life has been here,” he reflected softly during an interview he gave the year he retired. Indeed. Ron and Judy raised all three of their daughters here—one of them born in their faculty home on campus (Ron’s fondest Bennington memory), another married outside of Jennings (another favorite memory). Ron’s life, and life’s work, was here.

He was here for the opening of Dickinson, Tishman, and three new student houses in his first year alone. He was here when going co-ed was still considered controversial. Here for the first woman president. Here for the opening of VAPA, of CAPA, of another three student houses. Here before there was a Stickney Observatory or a Student Center or Recreation Barn. He was here for a half a century of triumphs and tragedies; here when students needed him, no matter when; here as Dean of Studies (1973-1976) and Dean of Faculty (1985-1991). The latter two positions, even if brief in his long tenure, were the times he most often referred to when looking back on Bennington. And looking back on Bennington was something the unofficial Bennington scholar was often called to do.

It was his second year at Bennington when the new president, Gail Thain Parker asked him to be the next Dean of Studies. To Ron, the request came “seemingly out of the blue,” but he was interested. He wanted to know how a college was run, and how this appointment would give him direct experience. But the position was a difficult one. Ron reflected decades later that it “tamed and humbled” him.

Humbled: yes; tamed: no. Ron was unrelenting in pursuing and implementing systems that codified the progressive education ideals he fervently believed in so that they would be accessible to all Bennington students, not just those who happened to have teachers and advisors dedicated to them. Ideals he supported above all: substantial student advisement and the abolishment of letter grades.

Ron did not give letter grades. It was a matter of principle. Grades were comparative and competitive, they offered little information to the student, and in the 1960s and 1970s they could be used to send a person to war. But despite what he considered to be sound arguments against grades, a good fraction of the faculty were unconvinced. Some faculty strongly preferred letter grades. But in Ron’s mind letter grades were a way of circumventing substantive narrative evaluations—what he considered the crown jewel of assessment. Ron made several proposals, some successful and others not. Though, with persistence, he was eventually able to convince a majority of the faculty that Bennington should abolish letter grades. The policy was honored until 1998 when grades were offered to students as an option again. This reversal was a travesty as far as Ron was concerned; the scourge of intrinsic, explorative learning. And despite the years that passed since he first argued against grades, his commitment to these ideals was unwavering.

Ron gave himself fully to teaching and advising, mentoring hundreds of students over the years, something he was recognized for by the Society for the Psychological Study of Social Issues in 2007, receiving their Undergraduate Teaching Award. Students loved Ron. They loved his classes. They loved what he helped them to discover and how those discoveries changed them, profoundly. They loved his dedication to their work. In fact, in Ron’s CV under “Accomplishments” he listed every single student thesis he was an advisor for since the 1970s. Students knew that he cared about more than their academic progress. It was not uncommon for Ron to ask his advisees if they were getting enough sleep, if they were making sure to eat, if they had checked in with their family.

Waiting lists for Ron Cohen classes were a typical situation. Students from across the disciplines were eager to get in. A Ron Cohen class was a transcendent course. One former student remembered taking “Persons, Groups, and Environments” with him years ago. “Our first homework assignment was a lengthy questionnaire Ron sent out. Write about a time you were angry with someone. What sparked the anger? Did they know how you felt? Did you forgive them? Write about a time someone was angry with you. There were lots of questions like these. Throughout the term our narratives were dispersed anonymously. We drew on them to engage in discussions and write papers. It contributed to the idea that psychology was all around us.”

Ron was active in the field of social psychology. He served as an associate editor of the scholarly journal Social Justice Research for almost two decades. His published papers appeared in the Journal of Personality and Social Psychology, Journal for the Theory of Social Behaviour, Journal of Social and Personal Relations, Human Relations, Human Rights Review, and Social Justice Research. He edited three books of social psychology and co-authored Political Attitudes Over the Life Span: The Bennington Women After Fifty Years, a study that helped social psychologists better understand what influences our political beliefs and the role college plays in shaping our attitudes.

Ron received fellowships from the National Endowment for the Humanities, the National Science Foundation, and the National Institute on Aging. In 2007, he was named as a fellow by the American Psychological Association for his “outstanding and unusual contributions to the science and profession of psychology.” He also served on the Bennington County Reparative Board for the State of Vermont’s Department of Corrections.

“Something I’m interested in is the way people remember things,” he shared during his last interview. This is the way Ron Cohen will be remembered: as an unforgettable teacher and generous mentor; a scholar and administrator of deep integrity, dedication and humor; a quiet shepherd of justice; a charitable, empathic neighbor; a champion of progressive education. He will be remembered as a person who showed up for his students, for his family, for racial and social justice, for jobs that were difficult and work that was thankless, and in doing so, made a good life for himself and generations of others here, at Bennington.

Ron is survived by Judy, his wife of 51 years; daughters Rebecca, Jessie (Allen Hutcheson) and Hannah (Haidi Arias); four granddaughters: Lily and Martha Hutcheson, and Mila and Remi Arias; as well as four siblings and their families.