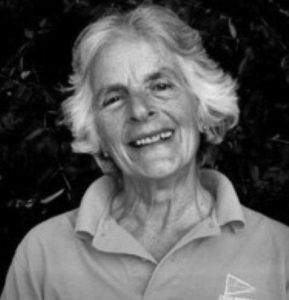 Katharine Evarts Merck ’46—former Bennington trustee, lifelong nurturer of causes that advanced the progress of humanity, and one of the College’s most stalwart supporters—died on April 11, 2020. She was 96.

Kate arrived at Bennington in 1942 at the height of World War II, in the echoing aftermath of the Great Depression. The national mood was dire, the future precarious, but Bennington was buzzing. The campus was a hive on the vanguard. Buckminster Fuller, a frequent lecturer, Peter Drucker, Paul Feeley, and Theodore Roethke were among some of the great minds drawn to teach at the college The New York Times called “an artistic mecca.” Kate was right at home.

There was a massive war farm effort at the time. The aim was to produce half of the necessary food for campus. The first-year student was all in on the pursuit, even augmenting the work with classes on food production and nutrition. It was familiar work to Kate, having grown up on Juniper Hill Farm in Windsor, VT. Kate hoped to study art at Bennington but wound up focused in the social sciences initially, taking courses with famed psychoanalyst, Erich Fromm.

She cared deeply for the vulnerable, with a particular sense of guardianship for vulnerable children. Perhaps this was what brought her to the Children’s Psychiatric Unit at Bellevue Hospital for her Non Resident Term in 1944 and 1945. The experience was likely to have scarred even the most well prepared students. Returning to campus, she changed her focus from social to lab sciences. Although, years later, the naturally inclined artist said, it was “a great mistake” and wished she had studied art and architecture after all.

A year before Kate was scheduled to graduate from Bennington she withdrew; that year, she and Albert Merck married. They celebrated 68 years of marriage together before Al died in 2014. The adoring partners were as dedicated to each other as they were to several causes that became a focus of their lives—justice, equity, and education. They had five children together. Kate raised the family while volunteering for hospice, participating in women’s groups, and campaigning tirelessly for social justice. Indeed, civic engagement was an Evarts family tradition and Kate was glad to carry it on. She spent the 1960s raising money and consciousness on behalf of the NAACP and Fair Housing, helping establish and serve on both boards.

Kate’s civic and philanthropic leadership took on new heights in the 1970s. First, with the encouragement of her cousin, Archibald Cox, Kate became a founding member of Common Cause—a nonpartisan nonprofit created to help ordinary citizens “hold their elected leaders accountable to the public interest.” She also founded the Plaid House, a group home for unprotected teens with nowhere else to go, which is still open today. And it was at this time, too, that Kate’s engagement with Bennington College deepened. A force at Bennington, Kate was an active volunteer, fundraiser, and advisor to several presidents before she was appointed to the Board of Trustees in 1972, a position she served in until 1979. At that time, President Bloustein wrote to Kate and said, “Your belief in the College and your willingness to help solve its problems were in some significant measure responsible for any success I’ve had.”

Kate served as a Trustee during one of the most expansive times in Bennington’s history. The physical campus was growing—Dickinson and Tishman were newly opened and VAPA would be constructed and opened during that time. At that time, the College was also advancing the fight for equality, justice and inclusion—something Kate ardently supported on campus and off.

In the late 1990s, with the student body expanding, three new houses were built. One was named to honor Kate and her devoted service to the College. At the naming ceremony, former board chair Deborah Wadsworth remarked, “For Bennington, [Kate’s] generosity has been virtually unbroken since the day she left. Along with Al, she has continued to care deeply about and to nurture the philosophy of teaching and learning at Bennington.”

Kate and Al were pacesetting philanthropists to many institutions, including Bennington. In 2002, the Mercks contributed $5 million, the largest unrestricted gift the College had received to date. Writing to then-President Coleman, they said, “We made this unrestricted gift so that the essence of Bennington’s ideas and ideals of education may be strengthened and diffused.” Kate added, “I’m very proud of Bennington. It’s got a lot of guts and I admire that.” Two years later, at the launch of the 75th Anniversary Campaign, the Mercks made a gift of $10 million, which was the largest single gift in Bennington’s history at the time. Speaking with reporters, President Coleman said, “The Mercks’ generosity exemplifies their unstinting dedication to Bennington and we, in turn, are eternally grateful. Bennington students benefit directly from such steadfast support by Kate and Al Merck and leave campus ready to make an impact on the world.”

So much of Kate’s support for Bennington was defined by her confidence in Bennington’s people, whether visionary presidents or students. Kate understood those she worked with and committed to; and when she saw a way to help, she did. Moved by the stories of student leaders who wished to study at Bennington, Kate made a gift to fund a full, four-year scholarship for one such student. She also gave nearly $1 million to support the Elizabeth Coleman Center for the Advancement of Public Action (CAPA), where they could situate their studies. Wise as ever, Kate remarked, “When you ask people for money, you have to ask them with your heart and not with a fact sheet.”

Kate returned to Bennington in 2013 for the All Class Reunion where she was honored with the College’s Hudas Schwartz Liff ’47 Award for Volunteer Service. During an alumni conversation she reflected, “This place brings you beyond where you are into some place you are glad to see. It is a fabulous place, hold it and love it. The people are so wonderful; it made me wonderful.” Generations past and present will continue to hold on dearly to Bennington, in large part thanks to Kate Merck.