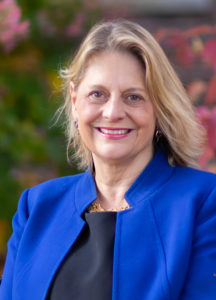 President Laura R. Walker arrived at Bennington in the middle of a global pandemic, in the midst of a racial justice revolution, in what some are calling a second Great Depression, and at the height of a higher education financial crisis. When I asked President Walker why she came to lead Bennington at this time, she spoke about perseverance. She referenced it again when I asked her about how she kept leading and reporting in New York during 9/11.

Prior to leaving New York Public Radio in 2018, Walker led the organization through at least two of its most pivotal points—becoming an independent, non-profit station and reporting during and after 9/11. In both instances, NYPR found stronger footing and purpose following the crisis. Perhaps this is why, when I asked her about the crises facing colleges today, she was confident that Bennington would not only get through them, but be stronger and better for it.

I interviewed President Waker on Zoom in September, where she spoke to me from the Brick House and I spoke to her from three miles down the road in my home office. Our conversation was edited for length and clarity. Transcripts of this conversation can be found here.