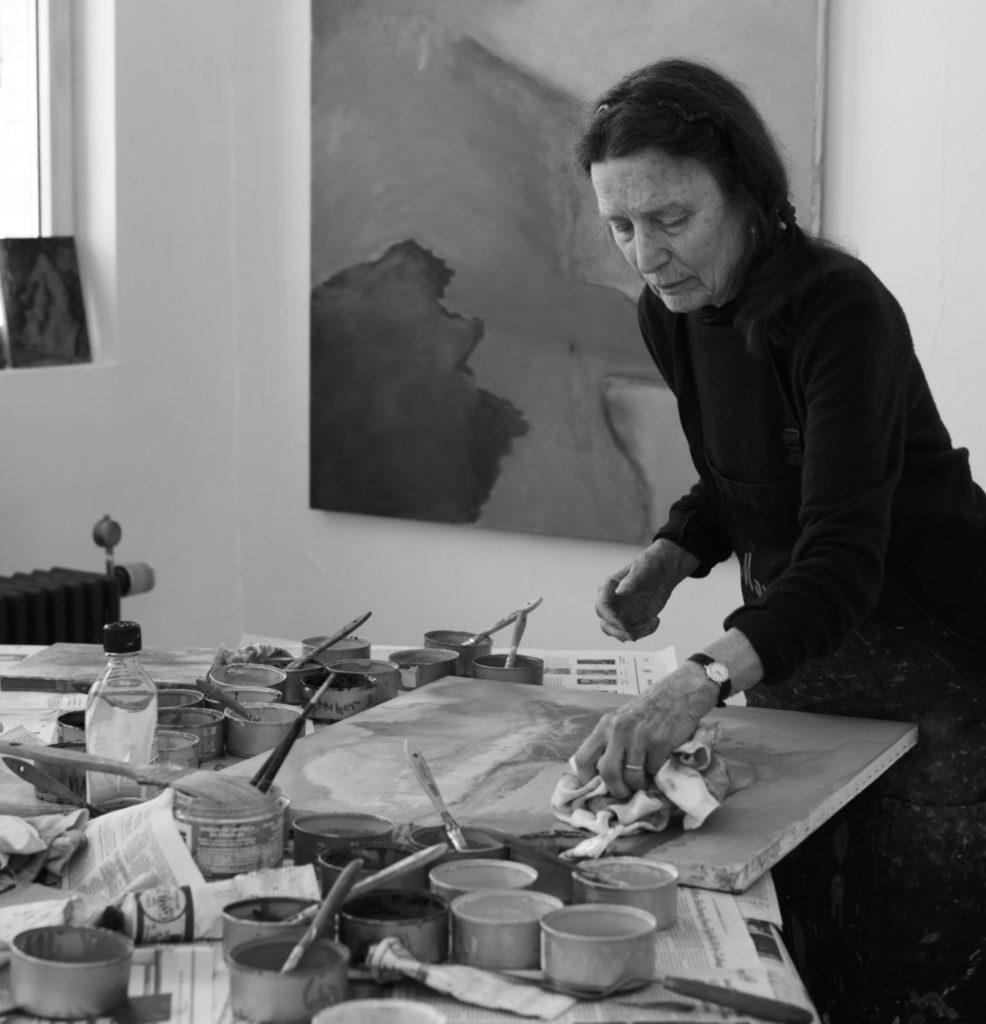 Emily Mason, Who Created Colorful Canvases, Is Dead at 87.

Part of a family of artists, she was known for creating abstract works by a process she liked to call “letting a painting talk to you.”

For more than 50 years, Emily Mason ’54, an abstract painter in a family of painters, would spend winters in Manhattan, where she had a studio in the Flatiron district, and the warmer months in Brattleboro, Vt., where she and her husband, the painter Wolf Kahn, also had a home.

“It is important to balance city life with experiencing nature,” Ms. Mason, a native New Yorker, told the magazine Western Art & Architecture in 2018. “Winter in the city is the time for the fermentation of ideas. Summer is my time to carry them out.”

This past fall, though, cancer left Ms. Mason too ill to make her usual return to the city. When she died on Dec. 10 at 87, it was at her home in Brattleboro.

In announcing her death, the Brattleboro Museum and Art Center, where she was an honorary trustee and where her work had been exhibited often, quoted her as giving a more painterly explanation, as it were, for not going south late last year.

“The colors were so incredible, I just couldn’t leave,” she said. “And then in November, the world looked like one of Wolf’s pastels.”

Color ebulliently deployed was at the heart of Ms. Mason’s work, and it was one of the things that set her apart from her mother, the abstract painter Alice Trumbull Mason. Whereas her mother’s paintings often featured highly structured, quasi-geometrical forms, Emily Mason’s vibrant works, generally in oil, explored the varieties of a single color, or the play between multiple colors, in joyously free-form fashion.

“Hot Item” (2013) is a furious collection of reds, tantalizing but also somewhat ominous. “Summer Harvest” (2018) is an inviting composition in yellow and gold that seems to radiate warmth.

Her method was not to plan out a painting in advance, but to start working and see where it took her. She might begin by laying a blank canvas on the floor, pouring paint on it from a tin (she sometimes recycled cat food containers for this purpose), tilting the canvas to and fro to let the paint run about, then adding colors, eventually setting it aside and resuming work later. It was a process, she liked to say, of “letting a painting talk to you.”

In a 2005 interview with The Brattleboro Reformer, she compared her method of working on a canvas to playing chess.

Emily Mason was born on Jan. 12, 1932, in Manhattan. Her father, Warwood, was a ship’s captain and later an executive at American Export Lines, a shipping company. Growing up, she was surrounded by artistic influences through her mother (a descendant of the Revolutionary-era painter John Trumbull), who for a time in the 1940s had a studio alongside Joan Miró.

After graduating from the High School of Music and Art in Manhattan and studying at Bennington College in Vermont, Ms. Mason graduated from the Cooper Union in New York in 1955 and went to Venice to study painting on a Fulbright grant. She studied at the Accademia di Belle Arti there — but, recalling the experience decades later, she sounded less than impressed.

“Class was very structured, very hierarchical,” she told Western Art & Architecture. “The maestro and his top student had the prime spots in the room by the big window,” she said, but “the rest of us were made to cope with a single light bulb.”

She and Mr. Kahn married there in 1957. They were back in the United States by the end of that decade, and Ms. Mason had her first solo exhibition in 1960 at the Area Gallery in Manhattan. But her husband and her mother were the attention-getters in this early part of her career, the arts writer David Ebony, who contributed to two monographs on Ms. Mason, said in a telephone interview.

“She developed her art overshadowed by these formidable talents,” he said.

Years later, though, she would sometimes be exhibited alongside one or both, as was the case in 1982 with a show at Tulane University pairing her and her mother. That show later came to the Washburn Gallery in Manhattan, where Grace Glueck reviewed it for The New York Times, noting that though Alice Mason clearly had an influence, Emily had developed a style all her own.

“As a painter,” she wrote of Emily, “she’s assertively not her mother’s daughter, but the continuity is moving.”

Ms. Mason by then was beginning to gain more recognition on her own as well.

“In the mid-’90s she really hit her stride,” Mr. Ebony said. “She started working on larger and larger canvases with more and more confidence.” The resulting exhibitions, he said, “were very colorful — pools of colors crashing into each other.”

Ms. Mason, who also taught at Hunter College for many years, was named for Emily Dickinson, and her mother gave her a book of Dickinson’s poems when she was a girl. Her paintings’ titles, she said, were sometimes drawn from phrases in those poems. She died on Dickinson’s birthday.

In addition to her husband, Ms. Mason is survived by two daughters, Melany Kahn and Cecily Kahn (who is also an artist), as well as four grandchildren and two step-grandchildren.

In 2017 Rava Films made a short documentary about Ms. Mason, “Emily Mason: A Painting Experience.”

“I’d like a painting to take me to a place I haven’t been,” she said in the film. “If it does, then that’s my reward.”