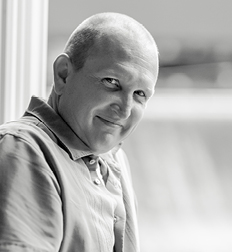 Bill Scully ’94—who brought world cuisine, hydroelectric power, and an entrepreneurial tenacity to Bennington—died in his home on July 19, 2020. He was 48 years old.

Originally from Whittier, California, the birthplace of lowrider trucks and Richard Nixon, Bill Scully arrived on campus in 1990. The freshman immediately knew that Bennington was where he would make a life for himself. And make a life, he did.

In 2002 Bill and his wife Maria opened their first restaurant, Pangaea. They saw a place for world cuisine steps away from campus. The fine dining restaurant was successful from the start, and became an informal outpost for Bennington College community gatherings and celebrations. A year later, Bill opened The Lounge, Pangaea’s casual next-door neighbor, which he expanded several times over.

By 2007, Bill had helped launch Allegro on Main Street, Bennington’s first fine-dining Italian restaurant; he had also purchased the historic Powers Market in North Bennington. And from 2008 to 2013, Bill led Dining Services at the College, where he revamped the menu and landed the College on national lists that recognized Bennington’s artful and ethical cuisine. Bill went on to sell Powers Market, The Lounge, and Pangea—keeping the latter two establishments in the Bennington family, where co-owners Nick Disorda and Lani DePonte-Disorda ’11 took over. The self-described “serial problem solver” was setting his sights on a new venture: developing hydroelectric power.

In 2008, oil prices were rising and lawmakers were putting together policies aimed at reducing Vermont’s carbon footprint. Between the two, Bill saw an opportunity. But the path to hydroelectric power development would not be clear or easy. The state had halted hydro development for almost three decades. Despite having no previous experience in the industry, Bill founded Carbon Zero LLC with his wife in 2009 to change Vermont’s energy policy and pave the way for hydroelectric. He was determined to make it possible to once again tap “the resource that built the state.”

By 2015, Bill and Maria had restored the Vermont Tissue Mill, transforming it into the most environmentally friendly hydropower plant in the country. Bill would share with anyone touring the facility that the plant didn’t just harness clean power, the process actually improved the water quality. For its innovation, the project was cited as a model for hydro development in a joint memorandum from the Vermont Congressional delegation to the Federal Energy Regulatory Commission. Bill went on to bring one more hydroelectric site online—a plant in Pownal, VT. It was his proudest accomplishment. It was also the venture that brought him back into Bennington classrooms, first as a visiting faculty member at the Elizabeth Coleman Center for the Advancement of Public Action (CAPA) where he co-taught ”The Village Privileges of North Bennington” with director Susan Sgorbati. The class resulted in the Paran Creek Watershed Project.

Bill returned to CAPA again, as a student, focusing his senior work on the Clean Water Act. He earned his BA from Bennington in absentia in 2018, an achievement he took to Facebook to share. Posting the Commencement program, he wrote, “It took me 28 years to get my name on this list. Thank you to the long list of people that kept me going along the way.” It was a rare turn of the tables for a man who was known best for helping others in the community reach their goals.

Bill found his way into local politics when he was frustrated by road maintenance issues in North Bennington. Ordinary citizens might notice or complain, perhaps write a letter to the Village Board or newspaper. Bill ran for office and won a seat he would maintain for five years. Last year he ran for a seat on the Bennington Selectboard. He was overwhelmed with endorsements. Supporters cited his vision, creativity, and proven track record of taking on seemingly impossible tasks. In his letter to the editor endorsing Bill, state Senator Dick Sears wrote, “[Bill] thrives on challenges, and he believes that anything can be accomplished by transforming impasses into design concerns.” Local endorsements were accented by alumni from Brooklyn, NY to Portland, OR, and stops in between, who posted photos of Scully for Selectman yard signs in front of houses, businesses, and public works of art. He easily won the four person race.

Only a year before his death, the avid cyclist had completed his most challenging bike race–the Tour of the Battenkill. Like most of the races he participated in, the Tour of the Battenkill was put on to raise money for local charitable causes. He posted his personal best time, cycling 42.2 miles and climbing 2481 feet, in spite of a broken right wrist and torn ligament. News of Bill’s inoperable brain tumor came shortly after and shocked the community. The only thing about Bill that seemed impossible was that he could be stopped by anything, even a brain tumor. Messages from alumni, Bennington College staff, entrepreneurs and organizations poured in, along with donations to a family GoFundMe page to make his last year the most comfortable it could be. People from every walk of Bennington life posted messages thanking Bill and offering their support and encouragement. The news of his death was met with grieving and moments of silence from the Village Board of North Bennington to the Selectboard of Bennington to Bennington College and organizations near and far. His legacy lives on in his expansive contributions to the community he called home for the last three decades.

Bill is survived by his wife and partner, Maria, and their daughter, Kiera.